What's next for occupy 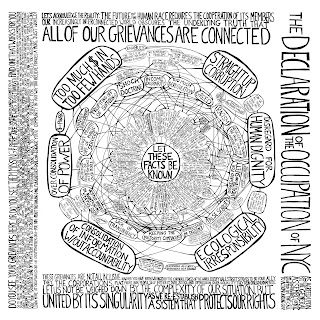 With the winter approaching, the momentum and the buzz about the occupy movement is dwindling and thus calls for an evaluation of it's goals tactics, and of course, success.

The Neoliberal policies that have captured most of the world today have created a crisis of the middle class. The dwindling middle class has created social instability and with the occupy movement, the people's resurgence against these systematic problems has come into the spotlight all over the world. If one expects to change things for the better, a re-formulation of tactics is needed to benefit from the heightened momentum of the occupy movement, and it needs to be done fast. The expectation of most liberals seems to be that this momentum will bring the democratic party to the power with a progressive political base, and that would lead to better reforms. I agree with that 'expectation' and think that will be a win for the occupy moment and the people in general.

However, is that the only thing to expect?

Given the reasons to the present global crises and the boom-bust cycles we have experienced in the past, we are compelled to seriously rethink the validity of the core arguments in our economic system. While race, as in the post below, is tightly dependent on the economic system, most other problems we face today in both economic and moral stand point, are even more intrinsically bound to the capitalist system. This global crises thus creates an avenue to discuss the validity of a capitalist system. As one of my physics friends claimed, "Capitalism is where the lowest potential for humanity is, given the human nature". To my non-sciency friends, this means that it is inevitable that we end up in a capitalist society. The reason implied here is the selfishness and drive to self preservation ultimately takes us to a capitalist society.

But is that true? are humans by their nature selfish? I think we can do better, and if we want to build a society that we can make people realize the value of humanity, we will be happier. Happier, not only as a society with less people dying of hunger, and less people having depression, but as individuals who see the happiness as less related to material wealth, but more related to one's inner self.

I think we need to dream about such a world. Our demands on banking regulations, limiting campaign financing, public education and/or universal healthcare, are just small steps in that sense. And if we have a greater dream, then we can formulate the steps to get there better, and more effectively. One of the most important facets most people tend to overlook in OWS is the aspect of community building. Most people see putting up a tent and staying in a urban part as a worthless act. However, one reason behind camping, music, discussions and all the 'weirdness' in OWS is that it is an avenue to get together as a community.

Importance of the occupy movement lies here, it is not just a grass roots movement to protest the current system and change certain aspects of it. It is a movement that calls us to first realize who we are and  how capable humans are, before thinking how better a world we can build. That is the goal I expect from OWS, and ourselves.

Can't finish without this..

Popular posts from this blog

No anarchy in progress without fun,

Amon Goeth in Schindler's list and pardoning the devil.

November 13, 2016
I finally watched it. I was attached to the movie the full three hours, was deeply disturbed by the imagery of the real events that was happening touched by the show of humanity and ended the movie with tears. Great movie... Yes! (Though, it wasn't a great movie, no. I want to write about that too, on a different post). While there were many scenes that are brilliant in many ways, one act puzzled me very much and I think was just pure genius. That is the scene where Amon Goeth kills the boy who was cleaning his bathroom bowl. Here's the last part of it... In the outset the scene portrays the devilish commander killing an innocent boy who think he was pardoned. But I think the scene goes far beyond that. It shows how Amon exercises his new found interpretation of power, power to pardon, in its ultimate sense by pardoning himself. Showing that he finally truly understand the meaning of power, the ultimate power yielded only by God, to pardon a person as villainous as he is
1 comment
Read more

May 26, 2020
[From a free-writing entry where I was trying to write about anger, which evolved into thinking about the movie Joker. Posting after I saw this news , seems only relevant...] Joker, yes, joker! I should watch it again. My initial fascination with it centered around it's portrayal of Joker as becoming completely himself. Real, in contrast with the rest of the society who are merely responding to the world, or are either following or reacting. There maybe be a deeper philosophical thread that I'd like to explore, but probably don't have the proper tools to unpack. However, recently, I have started to feel that another reason I really liked the movie, and also one of the reasons it being heavily criticized by the elite media, was it's portrayal of the society (not just the Joker,) in a more realistic way. A realistic craziness and anger! Like, shouldn't we all be angry and mad by the atrocities committed across the globe? Shouldn't we be crying for our brot
Post a Comment
Read more

xcorat
Well, each time I'm trying to explain myself, it gets more complicated....!! Just because I don't know which person inside me, to describe about.... Let's see..!! I am a Child, A confused thinker, A social worker, A LAZY ASS IDIOT (Oh yeah my favourite), Adventure lover, A like-to-meet-a-ghost kind of a person, Love to be alone , An Engineering student, Science freak..!!, and at last, a bad lover..:S