May 26, 2020
[From a free-writing entry where I was trying to write about anger, which evolved into thinking about the movie Joker. Posting after I saw this news, seems only relevant...] 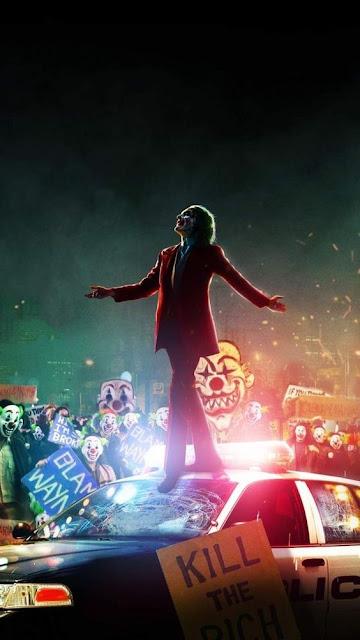 I should watch it again. My initial fascination with it centered around it's portrayal of Joker as becoming completely himself. Real, in contrast with the rest of the society who are merely responding to the world, or are either following or reacting. There maybe be a deeper philosophical thread that I'd like to explore, but probably don't have the proper tools to unpack.

However, recently, I have started to feel that another reason I really liked the movie, and also one of the reasons it being heavily criticized by the elite media, was it's portrayal of the society (not just the Joker,) in a more realistic way. A realistic craziness and anger!

Like, shouldn't we all be angry and mad by the atrocities committed across the globe? Shouldn't we be crying for our brothers and sisters, mothers and fathers who are locked away for no reason or gunned down by other humans who have become barbarians? If a stranger cutting me off on a freeway or someone wearing dreadlocks makes me angry, shouldn't I be furious that few people's need to control the world or pursue wealth literally kills thousands (or millions, however, you look at it) of fellow humans?

But we fucking aren't. We should go crazy in this world if we actually take a sober look around us. But we go on everyday. So it only feels right to think that maybe we are unwell! Maybe it is WE who are crazy, in reality.

The Joker portrays some ugly parts of the world. How we have become unaware of others as human beings. How we have come to view each other as only objects, either as things to laugh at, things to be scared of, or as things to exploit. All interactions are transactions. Every act of kindness is poisoned with some selfish need. Self preservation; desensitization; dehumanization; Charity is a business; Spirituality is a tool of ruling ideology... But the movie also shows that people are tired. Tired of the state of the world, and when someone shows the anger rising out from it, it makes us realize that anger IS the right response. It is crazy to NOT be furious. And that anger, anger from inter-generational oppression that runs through all our veins, anger that comes from being crushed and bullied our fragile bodies from every single direction, anger towards ourselves, for what we have become, that anger that has been burning our souls, is contagious. It is destructive, and it is powerful. That anger, however, doesn't respond to the speeches of a politician soliciting votes by pointing fingers at the 1%. Nor does it awaken to the screams of a red-capped buffoon claiming that our equally struggling neighbors are our enemies. That rage within us stays dormant, poisoning our souls. It stays undetected till we finally see it boils over from one person that couldn't keep it locked inside; when it finally pours out without being justified by some higher moral reason. It keeps, like smoldering ashes, waiting to be rekindled by the thought that they are right to be angry. Right to be angry at all of us, and that we should be too.

But this is scary. The Joker tries to imagine the outcome, with all the injustices leading up, and try to contextualize (I wouldn't call "justify") this exasperation. So it is scary to think that we actually do have similar rage hidden somewhere. So instead of identifying with reality, we try to undermine the movie..! (ironically, some recoursing into identity politics).

We try to kill the messenger.

Popular posts from this blog

No anarchy in progress without fun,

Amon Goeth in Schindler's list and pardoning the devil.

November 13, 2016
I finally watched it. I was attached to the movie the full three hours, was deeply disturbed by the imagery of the real events that was happening touched by the show of humanity and ended the movie with tears. Great movie... Yes! (Though, it wasn't a great movie, no. I want to write about that too, on a different post). While there were many scenes that are brilliant in many ways, one act puzzled me very much and I think was just pure genius. That is the scene where Amon Goeth kills the boy who was cleaning his bathroom bowl. Here's the last part of it... In the outset the scene portrays the devilish commander killing an innocent boy who think he was pardoned. But I think the scene goes far beyond that. It shows how Amon exercises his new found interpretation of power, power to pardon, in its ultimate sense by pardoning himself. Showing that he finally truly understand the meaning of power, the ultimate power yielded only by God, to pardon a person as villainous as he is
1 comment
Read more

xcorat
Well, each time I'm trying to explain myself, it gets more complicated....!! Just because I don't know which person inside me, to describe about.... Let's see..!! I am a Child, A confused thinker, A social worker, A LAZY ASS IDIOT (Oh yeah my favourite), Adventure lover, A like-to-meet-a-ghost kind of a person, Love to be alone , An Engineering student, Science freak..!!, and at last, a bad lover..:S